So, it finally happened. The iPhone 14 Pro and iPhone 14 Pro Max got an always-on display. If you’ve used a modern Android phone, you probably have experience with always-on screens — and need no convincing of why they’re a handy feature — but this is a new thing in iPhone world. And Apple, of course, is doing it a little bit differently than everyone else.

Always-on displays allow a phone to display basic information like the date, time, and notifications even when it’s locked and resting on a table. Typically, your whole display doesn’t remain on, just the most important parts of it. On Google’s Pixel phones, for example, you might see a black screen with just the clock and some app icons lit up. This is particularly useful because you don’t need to tap the phone or pick it up to see important info.

Apple is changing up that formula. Things are a bit different (and, perhaps, a lot better) with Apple’s implementation: instead of an always-on screen that’s mostly off, Apple’s always-on screen remains on, just a lot dimmer.

The next version of iOS, coming out next week, adds widgets and complications to the lock screen. All of those widgets and complications will remain visible on the iPhone 14’s always-on screen, even when the phone isn’t actively in use. Apple’s big twist is that the iPhone will also continue to show your lock screen wallpaper, colors and all, just significantly dimmed down. The whole screen really will remain “always on.” 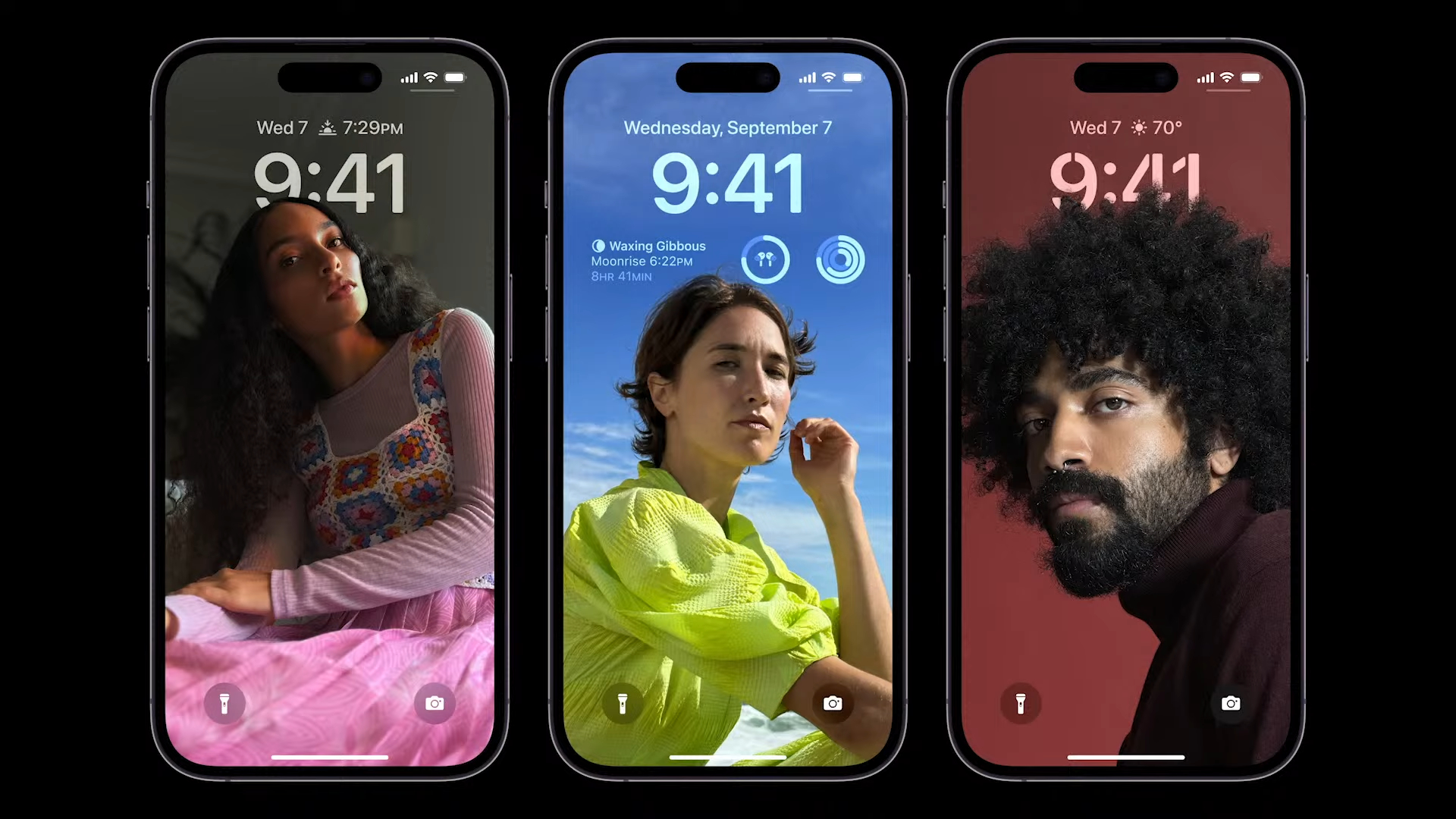 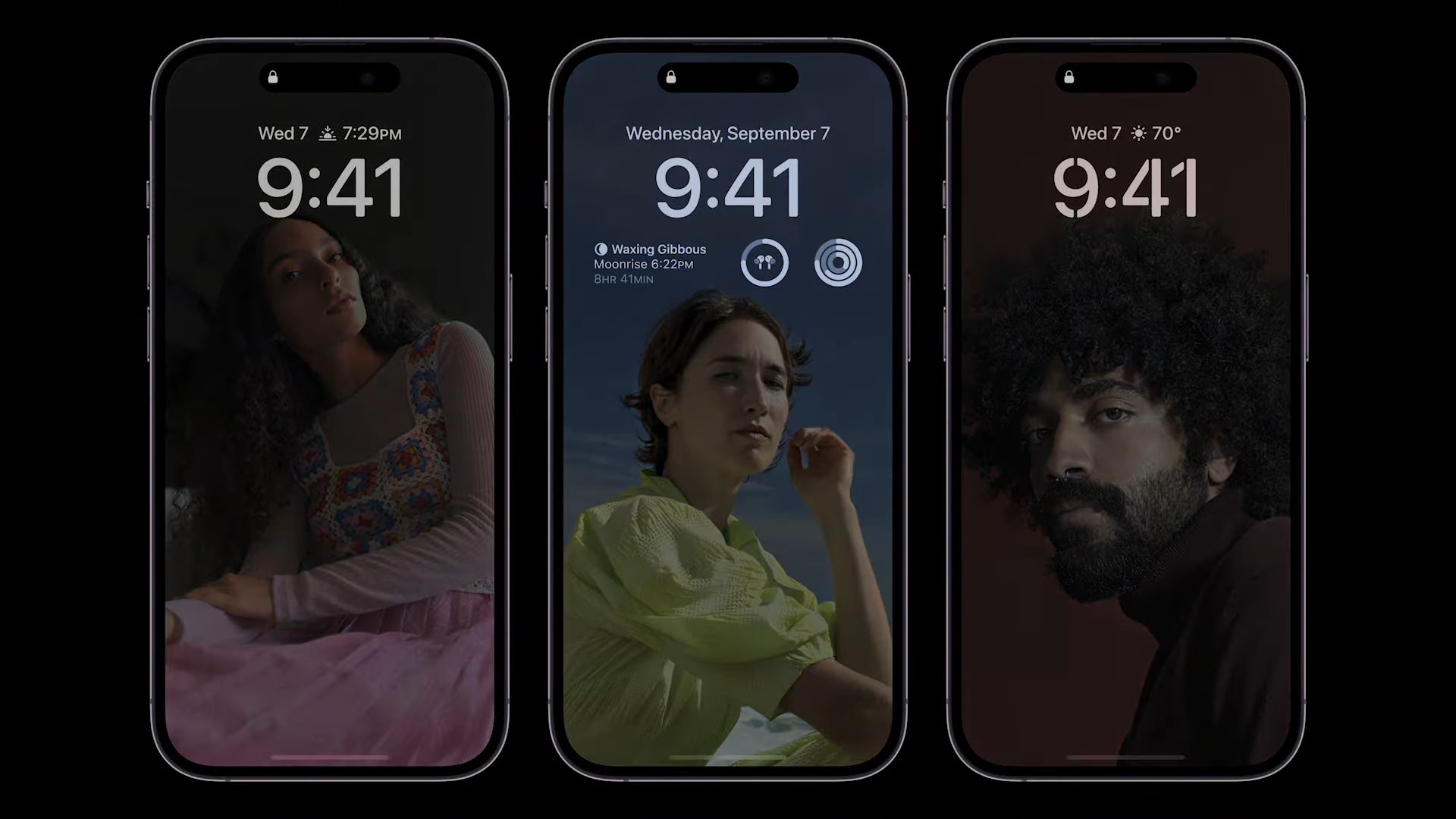 So why did Apple wait so long to add this feature? At least one reason is that it was waiting on technology that should allow its always-on screen to perform better than competitors.

First, Apple waited until the iPhone had an OLED screen, where only the pixels that are lit require power and they can all be lit at different levels. That’s something that OLED displays of all sizes, whether they’re in phones, smartwatches, or TVs, have in common. This makes OLEDs much more power-efficient than other display types, and always-on screens tap into that unique trait to put far less strain on the battery than it normally does in a fully “on” state.

But that isn’t the whole picture. While each iPhone 14 model has an OLED screen (as have many models since the iPhone X), only the 14 Pro and 14 Pro Max have the extra hardware necessary to power an always-on display. Apple marketing chief Greg Joswiak said the Pro’s always-on display is made possible “by a number of new technologies that make the display incredibly power efficient,” including multiple coprocessors within its chipset. The iPhone 14 Pro and Pro Max displays can dynamically adjust their screen refresh rate from a battery-intensive 120Hz all the way down to a low-power 1Hz mode, meaning it only refreshes once per second.

Getting more technical, the iPhone 14 Pro and Pro Max utilize a low-temperature polycrystalline oxide (LTPO) screen within its display to dynamically adjust the refresh rate, and Joswiak said it also allows for “the display to intelligently dim the entire Lock Screen.” Similar tech can also be found in the Apple Watch Series 5 and newer (excluding the Apple Watch SE), plus some Android phones, like Samsung’s Galaxy S22 Ultra. It’s a fairly new tech for phones and not something you’re guaranteed to find in every device.

Getting an always-on screen into a phone definitely doesn’t require having an LTPO screen (mainstream Android phones had them nearly a decade ago, like on 2013’s Moto X, and even Nokia’s Lumia 925 Windows Phone had a limited version of it). But something that older and newer takes on the always-on display have in common is that they aren’t as rich an experience as what the iPhone 14 Pro is offering.

We won’t know how much Apple’s always-on feature will affect battery life, but previous iterations of its LTPO screen and low-power display driver delivered great battery results, as we saw when we reviewed the Apple Watch Series 5. My colleague Allison Johnson also noted in her Samsung Galaxy S22 Ultra review that it, too, uses LTPO tech to yield more efficiency while in always-on display mode, though that phone’s overall battery life expectancy wasn’t great.

The iPhone 14 Pro presents an even bigger jump over the base iPhone model than previous years. While you could typically expect improved cameras, along with a few other exclusive tricks, the always-on feature is a visible and useful change to anyone who sees it in action. Hopefully, Android competitors will chase after a way to bring colorful, more info-dense always-on screens to their new phones, too.

(13563)
19,00 €
A differenza dei tradizionali auricolari tondi, gli EarPods sono stati disegnati sulla forma dell’orecchio umano, ed è per questo che risultano più comodi per un maggior numero di persone rispetto a qualsiasi altro tipo di auricolare in-ear. Gli alto... read more
(a partire da 07/02/2023 09:35 GMT +01:00 - Altre informazioniProduct prices and availability are accurate as of the date/time indicated and are subject to change. Any price and availability information displayed on [relevant Amazon Site(s), as applicable] at the time of purchase will apply to the purchase of this product.)
Compra
Auto Amazon Links
We use cookies on our website to give you the most relevant experience by remembering your preferences and repeat visits. By clicking “Accept All”, you consent to the use of ALL the cookies. However, you may visit "Cookie Settings" to provide a controlled consent.
Cookie SettingsAccept All
Manage consent