Would you consider buying a $299.99 webcam? That’s the cost of Opal’s C1, which is now available to purchase on an invite-only basis. My guess is that many of you will say no. Others, who are on the never-ending quest to look good for all of those Zoom meetings, might have a list of questions in need of some really convincing answers, and rightfully so. Like, why pay this much when there are so many other more economical options, including using your phone as a webcam? And why go with newcomer Opal over legacy brands like Logitech?

Opal has good answers to those questions. But having a chance to try the webcam itself was more convincing than any answer I received. The C1 aims to — and mostly succeeds at — supplying DSLR-like image quality (complete with plenty of background separation or bokeh) for far less than a decent camera-turned-webcam might cost you, without all of the dongles and other hardships that sometimes come with the territory.

Our review of Opal C1 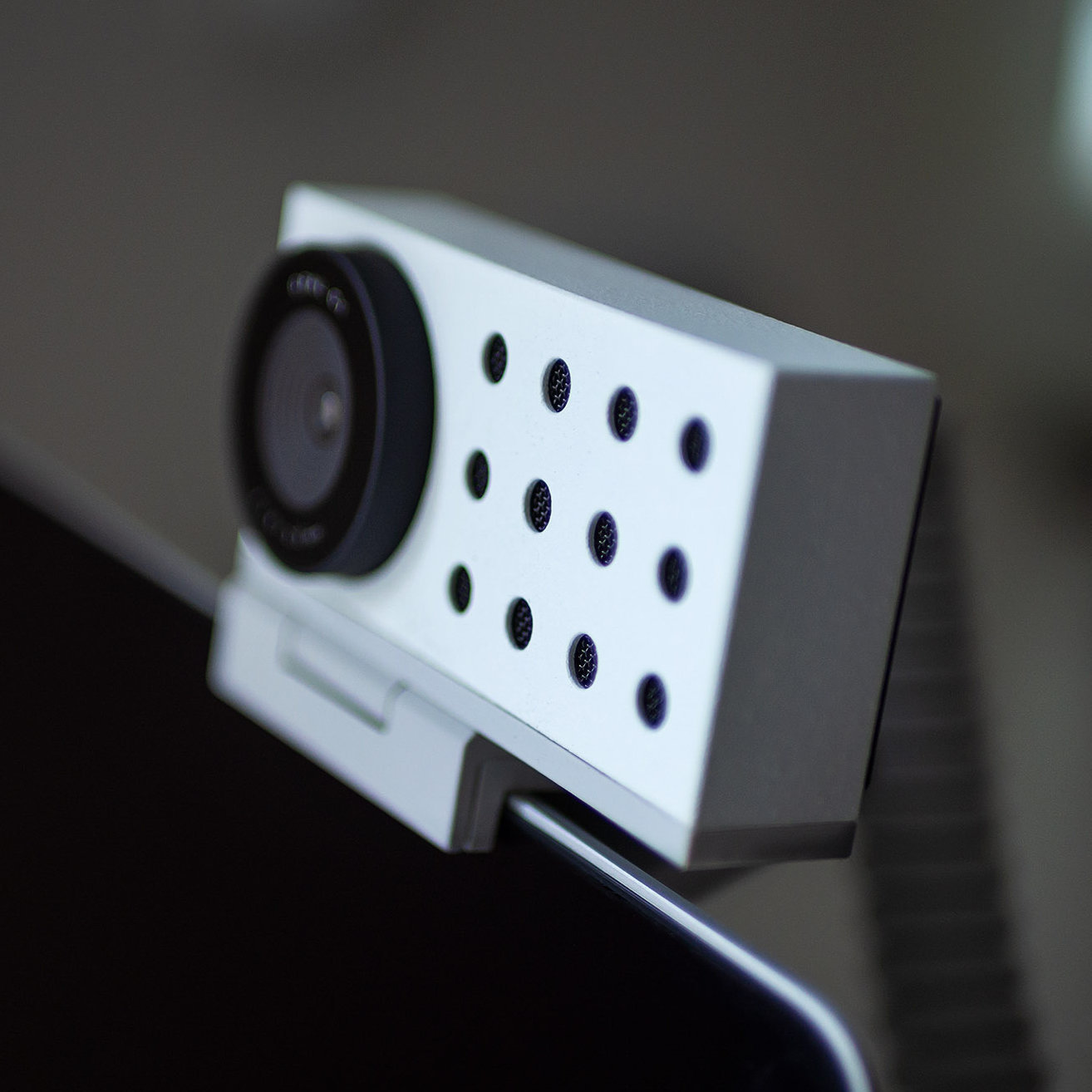 The C1 was designed by Kenny Sweet, who was responsible for the cute but misguided Google Clips camera, among many other popular tech products. That ID comes through here, but it almost looks like something that Essential might have whipped up. The C1 is available in either a white or black colorway, and its paint finish is matte with glossy speckles that only show themselves in certain lighting. I don’t want to gush too much, but it’s lovely to look at.

The C1 has an indicator light that’ll let you know when the camera is in use. The front of the webcam also hosts stereo mics in its grille, with an extra noise-canceling microphone on its rear. Compared to my MacBook Pro’s built-in microphone, my voice is just as clear, but through the C1 it has a little more resonance and depth to it. When I was recording a sample, some home construction next door started, and while its noise cancellation effects weren’t great, it was capable of picking my voice out from all of the noise.

Here’s what the stereo microphones in the Opal C1 sound like:

The backside looks like a heatsink you’d apply to an M.2 SSD inside your custom PC, and indeed, it’s partially used for dissipating heat (in addition to looking rad). It’s also where you’ll find its USB-C port. Opal’s webcam includes a sturdy mount that can hang onto a monitor or a MacBook lid, though the webcam itself can attach to any ¼-20 tripod mount.

The C1 features the Sony IMX378 sensor (the same one used in Google’s first Pixel smartphone released in 2016) capable of up to 4K resolution at 30 frames per second behind an f/1.8 lens. It currently defaults to 1080p at 30 frames per second because Opal says 4K can crash videoconferencing apps. The higher resolution is there as an option, so owners can utilize it for streaming or recording if they want. I was initially bummed out that the C1 lacks the capability to record at 60 frames per second, but it nevertheless seemed to run more smoothly in video calls than other webcams that I had on hand, like Elgato’s $199.99 Facecam.

This is where Opal’s pitch for the C1 starts to sound more like a phone than your average webcam. Software has become the secret sauce responsible for driving many features in the best smartphone cameras. And like the top phone makers, Opal, too, is putting just as much (if not more) thought into the software side of the C1’s performance, not just the specs.

The C1’s automatic settings excel at making me look far better in multiple lighting scenarios than any webcam I’ve tried so far. The out-of-the-box settings also produce a better image than even my Olympus E-M10 Mark II mirrorless camera. I bet it’d be a closer race if I labored over tweaking my camera’s numerous settings, which feels like an arcane skill that I sadly lack. That’s the big advantage of the C1.

Verge readers who’ve used recent flagship phones probably know from experience that the power of software to enhance picture quality cannot be understated. But it’s not just software at play here. The C1 has an Intel Myriad X chip inside that helps to power the set of features presently found in the macOS app, which are a mix of what you’d expect to see for a webcam, along with some interesting additions (Windows support is coming in late 2022, though the C1 works as a plug-and-play device right now). The app itself is currently considered a beta and Opal says it plans to add more features in the future.

My work desk is positioned in such a way that I’m backlit by windows, which always presents a challenge for webcams and DSLRs alike to light me adequately and to make my skin look its natural color. Yet, I was happy leaving the task up to the C1 to figure out what was right because it reliably made me look good. But if you’d prefer to tweak, there are several settings in the macOS app that can be customized, including focus locking at a range of distances, brightness, exposure, saturation, contrast, vibrance, and white balance.

Digging further into the app, the bokeh slider can add some simulated blur to your background. Despite some similar halo effects to what we usually see from portrait modes on phones, the end result could easily be confused for the real thing, particularly when it’s viewed through a streamed video call. Opal says its webcam has its own “graphic rendering pipeline that actually models the physics of how light enters a lens through a hexagonal lens – all to make a Bokeh effect that is far more convincing.” Basically, Opal figured out a software solution to this hardware problem, as many phone makers have, to defy what’s possible with these tiny lenses.

The C1’s artificial blur is far more convincing than Zoom’s blurred background feature, but it doesn’t provide the same level of privacy that Zoom’s does — it’s still possible to make out what’s in the background behind you. It’s more akin to the Portrait Mode that Apple baked into the latest version of macOS.

Another optional feature that you can turn on is “Face Lock,” which follows your face’s movement, like Apple’s Center Stage feature on iPad Pro. The “stickiness” of this feature is controlled by a slider in the app and at high settings it almost seems to predict your movements instead of reacting to them. It can look blurry and a little distracting on the high setting (you can see what that looks like in the video below), so I imagine most people will want to keep this setting on low to medium for a more smooth, subtle tracking effect. Another thing I liked during my time with the C1 is that any changes that I made to the camera’s settings were applied automatically, even when I was already using it in Zoom.

Many of these features aren’t novel in the realm of webcams, but the company has more ideas to take advantage of its Intel chip and software. One of the more ambitious ideas is gesture recognition. Opal intends to let users drop from video calls by signaling the peace sign or to zoom in on their picture by making a pinch gesture in front of the C1.

Additionally, the company is testing an update for release in the coming months that will use machine learning and neural networks on the Intel chip to improve how you look and sound. It aims to deliver a feature called Studio Sound that’ll push the voice quality through a neural net to enhance the level of depth and clarity to rival a dedicated podcast-grade microphone.

It also wants to be able to utilize the C1’s software and hardware to evaluate your behavior in calls, like grading you on how much eye contact you gave or how well you did at reducing filler words like “ums” and “uhs” in your speech. Opal didn’t attach a timeframe to these ideas, or comment on whether they’ll be opt-in features, but these would push the C1 far beyond what other webcams are attempting.

We’ll have to wait to see whether Opal delivers on any of these promises, but for now, it delivers on the goal of being a convincing stand-in for a DSLR. It’s far simpler to setup, use, and manage than my large camera or even a smartphone converted to work as a webcam. There are no batteries, space constraints, multiple cables and dongles, or driver woes to worry about.

The C1’s biggest obstacle is its $299.99 price. But if you primarily work from home and value having a stellar picture in videoconferencing apps, this might be worth it to you — especially if you’ve tossed around the idea of investing in a pricey DSLR (or already did).

Photography by Cameron Faulkner / The Verge

(21)
29,99 €
La versione più conveniente di Fire TV Stick - Goditi uno streaming rapido in Full HD. Include il nuovo telecomando vocale Alexa | Lite. Ideale per nuovi utenti - Accedi a film e programmi TV gratuiti dalle app, come RaiPlay e YouTube. Configurazione... read more
(a partire da 30/06/2022 22:08 GMT +02:00 - Altre informazioniProduct prices and availability are accurate as of the date/time indicated and are subject to change. Any price and availability information displayed on [relevant Amazon Site(s), as applicable] at the time of purchase will apply to the purchase of this product.)
Compra
Auto Amazon Links
We use cookies on our website to give you the most relevant experience by remembering your preferences and repeat visits. By clicking “Accept All”, you consent to the use of ALL the cookies. However, you may visit "Cookie Settings" to provide a controlled consent.
Cookie SettingsAccept All
Manage consent