NASA’s incredibly powerful James Webb Space Telescope has been in space for three days now, but perhaps the riskiest part of its journey to deep space is just getting underway. Soon, the telescope will initiate an intricately choreographed mechanical dance as it slowly contorts its shape and unfurls, in order to reach its final form for observing the distant cosmos.

It’s a type of reverse space origami that’s never been performed before, but it’s absolutely necessary for the James Webb Space Telescope, or JWST, to fulfill its mission. The telescope was simply too massive to launch on any operational rocket while fully extended. So when it catapulted into space on top of a European Ariane 5 rocket on Christmas Day, it made the nail-biting trip folded in on itself like the world’s most expensive Swiss Army knife.

Now over the course of the next two weeks, JWST will twist and reshape — deploying one beam here, a mirror there — until it is completely configured for peering into the deepest parts of the Universe. “We sometimes call Webb the ‘Transformer Telescope,’” Amy Lo, the JWST alignments engineer at the telescope’s primary contractor Northrop Grumman, tells The Verge. It’s a daunting process with hundreds of moving parts that engineers have tested over and over again on the ground, as it has to be nothing short of flawless. But there are many points along the way where the failure of one small release mechanism or pulley could jeopardize the future of the entire JWST mission. While mission controllers on the ground have a few troubleshooting techniques they can employ if something gets stuck, ultimately the JWST spacecraft must do every deployment on its own to near perfection.

JWST is heading to a final destination roughly 1 million miles from Earth, and there are no operational rockets or spaceships that can safely bring astronauts to such a distance to give the telescope a tuneup. And even if humans could reach it, JWST just isn’t designed to be serviceable. So if the telescope breaks in a fundamental way, that’s it for a mission that is running NASA a total of $9.7 billion.

It may all sound like needless complexity for a mission of this magnitude, but there never was an easy path for JWST, according to NASA. “I actually strongly believe it’s not possible to make it simpler within the constraints that we have,” Thomas Zurbuchen, the associate administrator for the science mission directorate at NASA, tells The Verge. “This is what it is.”

Designers of JWST knew from the beginning that their creation would have to unfold while in space. In 1996, when scientists first proposed making a telescope like this, NASA’s administrator at the time, Dan Goldin, challenged engineers to create the spacecraft with a primary mirror that was up to eight meters wide. Ultimately, designers settled on a mirror that was 6.5 meters, or 21 feet across, but that decree determined JWST’s folded fate.

That’s because the largest rockets currently flying aren’t wide enough to carry a mirror of that size. Whenever you launch something into space, the spacecraft has to fit inside a rocket’s payload fairing — the bulbous structure that sits on top of the rocket throughout the first part of flight. The fairing is critical, as it shrouds the spacecraft during launch, protecting the payload from the atmosphere until reaching space. However, the fairing’s width is a major limiting factor for a spacecraft’s design, since the vehicle must fit inside. It’s a problem that those in the space industry often refer to as the “tyranny of the fairing.” 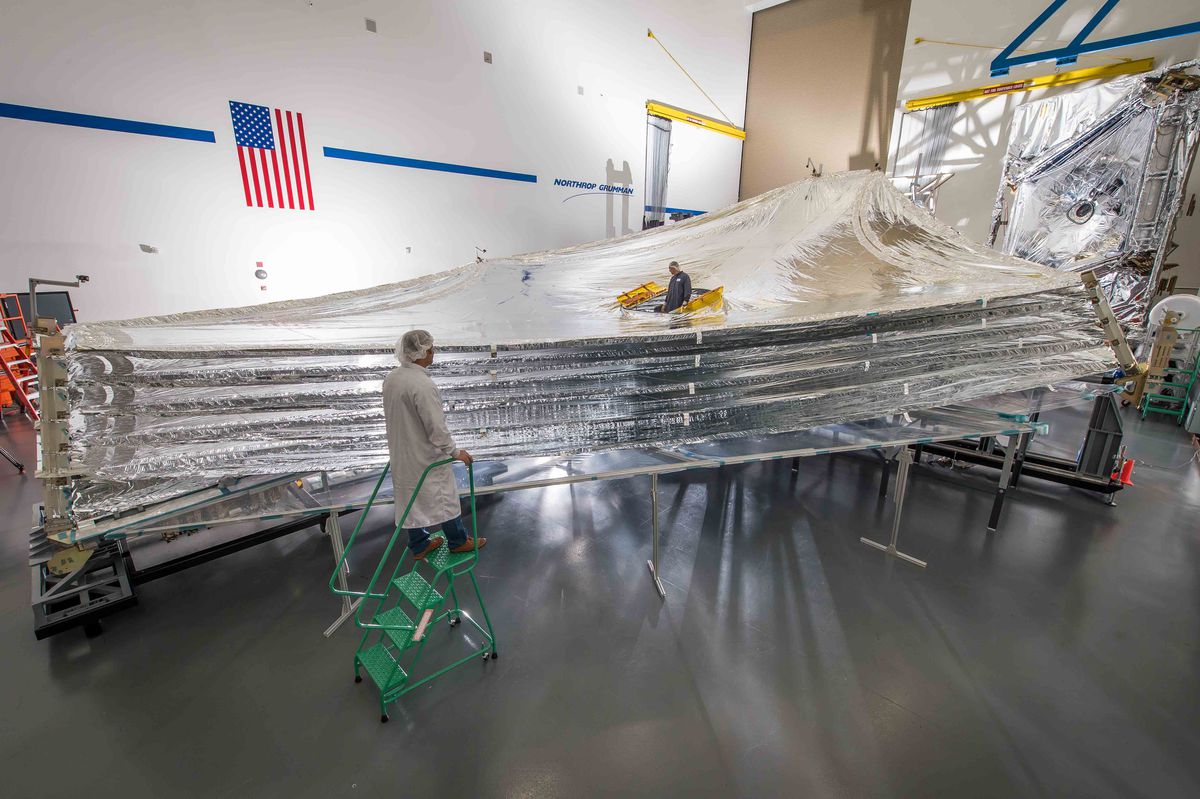 Enter the sunshield, which provides some impressive sunblock for JWST. The shield consists of five ultra-thin layers of a shiny material called Kapton, each layer the size of a tennis court. The outermost layer will always face the Sun and get most of its heat, operating at a scorching 230 degrees Fahrenheit. But each successive layer will be cooler and cooler, so that JWST’s instruments stay nice and cryogenic.

The shield’s heat-reflecting membranes are so delicate, that extra special care and engineering were needed in order to extend the layers outward in space and pull them taut without ripping. “There are systems that will spread the layers out and tension them,” Feinberg says. “It’s a little bit like a sail on a boat in terms of how you kind of wind it up.”

there are moments when there really are no backup options

The entire process relies on hundreds of different moving parts, including up to 140 release mechanisms, 400 pulleys, 70 hinge assemblies, and 90 cables, according to NASA. There are also various contingency plans in place in case a deployment doesn’t perform as expected. NASA has the option to resend commands to the telescope, in case the first command does not trigger a move. Engineers have also built as many redundancies into the spacecraft as they could. There are areas with multiple circuits that can perform the same task, in case the primary circuit doesn’t fire properly.

But there are moments when there really are no backup options. Throughout the deployment process, there are more than 300 events known as “single point failures.” Those are the deployments that have to work as designed, because they can’t be built with redundancy. “Single point failures are funny little things. They’re used a lot,” says Lo. “And technically what they mean is, this thing must happen.” JWST relies on them heavily throughout the deployment process. For instance, a total of 107 release devices are needed to release the sunshield membranes, allowing them to unfurl to their full shape. All 107 of those devices are single point failures, according to Lo.

NASA is no stranger to single point failures, though. When the space agency landed its Perseverance rover on Mars this February, the landing sequence had roughly 100 single point failures baked in, according to Zurbuchen. The entire landing went flawlessly. Additionally, NASA and Northrop Grumman have tested JWST’s various deployments on the ground for the past two to three years, intricately rehearsing them for the final show. Each component was tested individually on the ground dozens of times first, before being added to the spacecraft. And then the entire telescope was folded and unfolded multiple times as a cohesive unit.

“So do we have confidence that we will deploy on orbit? Yes, we do,” says Lo. “And the reason is because we go through such rigorous testing from basically the ground level up.”

“do we have confidence that we will deploy on orbit? Yes, we do.”

JWST’s testing took many years longer on the ground than planned, but it had to be rigorous because of its inability to be repaired. It’s one of the biggest differences between JWST and its predecessor, the Hubble Space Telescope, which has been orbiting the Earth since 1990. Hubble was purposefully designed to get tuneups while in orbit by visiting astronauts; JWST doesn’t have that capability. Plus sending humans to the telescope would introduce too much heat anyway. “Even if you put a spacesuit around you or me, it’s still way warmer than the telescope environment,” says Zurbuchen.

Though a human servicing mission is not feasible for JWST, NASA did make one small design tweak in case the agency wants to give the telescope a tuneup someday. Included on the back of JWST are stickers in the shapes of crosses. They’re meant to serve as targets, to help guide a potential robotic spacecraft visitor to JWST in the future. Over the last decade, various space companies have been working on “servicing satellites,” designed to catch up with satellites already in space and grab hold of them, either to refuel their tanks or to tweak aging components. It’s possible that one day, NASA may want to send a servicing satellite to JWST to add more propellant to the telescope’s tanks, extending its time in space. If that happens, the targets will provide a reference point for where the visiting spacecraft should attach to fill up JWST’s tank.

However, no one at NASA is even thinking about such a refueling mission right now. Everyone associated with JWST is squarely focused on the deployments. And once the telescope is completely unfurled over the next two weeks, there is still plenty of work to be done as the observatory travels through deep space. NASA will continue to adjust JWST’s mirrors ever so slightly, ensuring that they all align as intended. And then about 29 days after launch, the telescope will execute one final burn of its thrusters, putting it into its final position in deep space.

At that point, the work is only beginning. Mission personnel will then test out and calibrate all of JWST’s instruments to make sure they work properly. That process will take months, with science operations scheduled to begin sometime this summer.

So even if JWST does deploy as intended after two weeks, the anxiety doesn’t really end. “That’s when I think a lot of us will breathe a sigh of relief, but of course, the instruments and the mirror phasing would have just begun,” Lo says. “A different group of folks — the instrument builders, designers, engineers, and the scientists — would only just start to be holding their breath.”

(115160)
17,99 € 8,19 €
Velocità UHS-I di Classe 10 fino a 100 MB/s* Ottimizzata per l'uso con i dispositivi Android Capacità fino a 512 GB** Resistente
(a partire da 07/02/2023 07:58 GMT +01:00 - Altre informazioniProduct prices and availability are accurate as of the date/time indicated and are subject to change. Any price and availability information displayed on [relevant Amazon Site(s), as applicable] at the time of purchase will apply to the purchase of this product.)
Compra

(83466)
42,49 € (2.499,41 € / l) 31,99 € (1.881,76 € / l)
Questa confezione multipla contiene una cartuccia d'inchiostro nero da 8 ml e una a colori da 8 ml, il set completo d'inchiostri per la stampante in un formato pratico e conveniente.
(a partire da 07/02/2023 07:58 GMT +01:00 - Altre informazioniProduct prices and availability are accurate as of the date/time indicated and are subject to change. Any price and availability information displayed on [relevant Amazon Site(s), as applicable] at the time of purchase will apply to the purchase of this product.)
Compra
Auto Amazon Links
We use cookies on our website to give you the most relevant experience by remembering your preferences and repeat visits. By clicking “Accept All”, you consent to the use of ALL the cookies. However, you may visit "Cookie Settings" to provide a controlled consent.
Cookie SettingsAccept All
Manage consent