Fundamentally, there’s not much difference between a battery bank you buy from Anker and a power tool battery from DeWalt — both generally contain the same 18650 lithium-ion cells. But to do all that, your power tool batteries would need a powerful USB-C port.

And that hasn’t really been a thing… till now.

Powering hours of play on your Steam Deck with a DeWalt battery? That’s now a thing #techtok #dewalttools #batterylife

The $100 DeWalt DCB094 USB Charging Kit lets you add that port to any DeWalt 20V power tool battery in a literal snap. Slide this quarter-pound adapter onto your battery pack, and you get a bi-directional 100W USB-C PD port. That means not only can you charge up to a MacBook Pro-sized laptop with a big enough DeWalt pack, you can charge those DeWalt packs with your laptop or phone’s USB-C charger as well.

The adapter supports everything from the cheap 1.3Ah packs that came with your loss-leader combo kit to the massive 15Ah FlexVolt packs you’d probably only stick in stationary tools. It’s the biggest gadget charging battery you’re liable to find outside of dedicated power stations.

As someone with a garage drawer full of DeWalt batteries, I couldn’t wait to put it to the test. But it’s also not quite the experience I was dreaming of. 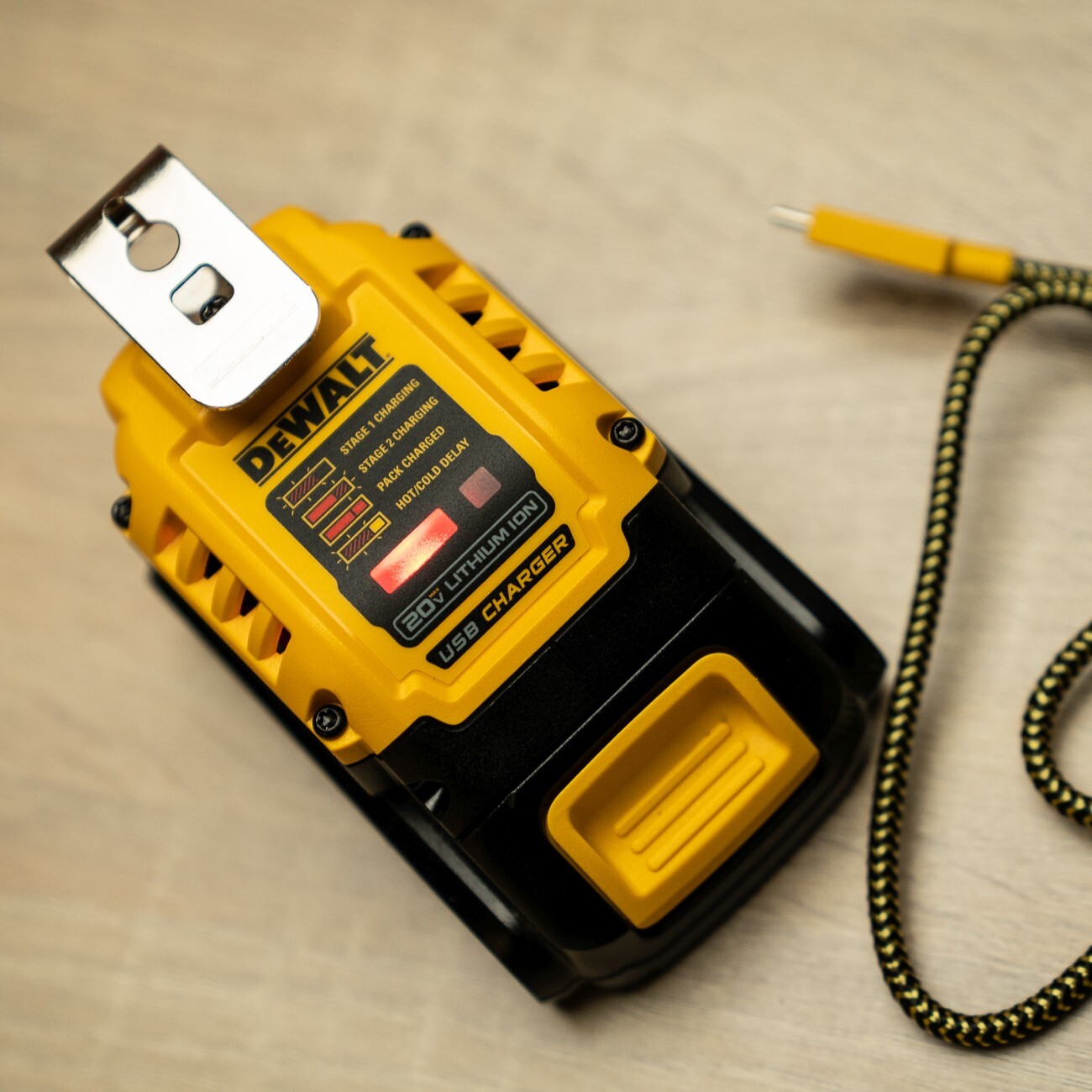 How we rate and review devices

I’ve been testing the DeWalt DCB094 on and off for months, and here’s the good news: it totally works.

I turned DeWalt’s monster 15Ah pack into a USB-C external battery that was able to charge my wife’s 14-inch MacBook Pro (69.6Wh) three full times and still had gas in the tank. My Steam Deck? I charged up its 40.04Wh pack five full times — that’s 10 extra hours of Elden Ring right there. When I filmed a nearly three-hour timelapse Lego build with my iPhone, I plugged it into a 6Ah DeWalt pack knowing there was no way I’d run out of juice.

Every DeWalt 20V battery I tried, new or old, large or small, worked with the adapter, too. That includes my two 1.5Ah packs, one 1.7Ah pack, the two 5Ah packs that came with my lawnmower, and the two 6Ah packs I bought about a year ago and rarely use. I clocked them all charging up to 100W in both directions over that USB-C port, enough to keep today’s (but not tomorrow’s) biggest USB-C PD laptops running just like they were plugged into the wall.

When it came time to recharge those power tool batteries, the 100W USB-C port sometimes let me do it faster than DeWalt’s AC adapters, too. While DeWalt unfortunately only ships the DCB094 with a 65W USB-C charger, even that should offer a faster charging rate than the company’s cheaper AC adapters that come with drill or driver kits. And when I added my own separately purchased 100W USB-C charger, I was able to shave off time over my 4A (80W) DeWalt AC adapter when charging the very biggest packs.

Here’s how fast I got these batteries to charge and roughly how much I got out of them:

The only issue I had was that if I fully drained a battery, and I mean fully drained it — ran it all the way down in a leaf blower or drill repeatedly until it would spin no more — sometimes the DeWalt adapter wouldn’t light up to charge when I popped it on. Sometimes I had to trick it by plugging it into a different battery or charger first. Oh, and you can’t charge one DeWalt battery with another DeWalt battery using two adapters. I tried.

So if it largely all works beautifully, why am I giving it this product a 6? Partly because The Verge just moved to a full 10-point scale for review scores to avoid score inflation — a 6 is still good! — but also partly because the DeWalt adapter’s advantages begin to recede when you’re not pairing it with a 15Ah battery that costs $389 all by itself.

With smaller batteries like my 1.5A, 1.7A and even 4Ah packs, they simply didn’t charge needy devices long enough to justify reaching for them over a traditional battery bank or charger.

Part of that’s likely due to transfer losses, which aren’t unique to DeWalt. You can’t fully charge a 100Wh laptop battery with a 100Wh battery pack like DeWalt’s DCB205 because some of that energy doesn’t make it across. (Some gets expended as heat, and I can attest that charging my 100Wh HyperJuice with the DeWalt adapter made the HyperJuice get uncomfortably hot to the touch.) In general, I saw losses of between 20 percent and 33 percent with my gadgets – for example, the 6Ah (120Wh) DCB206 only gave me 80Wh worth of Steam Deck battery life.

But that 6Ah battery is also a 2.5-pound brick once you add the DeWalt adapter — twice the weight of my HyperJuice, even if we’re assuming I don’t have to buy the DeWalt battery because I already have one for my tools. DeWalt’s 5Ah battery is only a little lighter, but then I might only be looking at 66Wh of power for my gadgets, and so on.

When you consider the fact that DeWalt’s batteries are quite pricey and heavy for the capacity they typically offer, I can’t really recommend someone buy into the DeWalt ecosystem just for this feature, unless you really need rugged batteries that can charge your devices and power tools on the go.

But if you already have a garage full of sizeable DeWalt batteries that don’t get a lot of use? I could absolutely see myself spending $100 if I didn’t already have a capable power bank or two. Between the 5A charging speeds and the 100W output for gadgets, there’s a lot to like.

Now, though, what I really want is for DeWalt and company to take the obvious next step: stick the USB-C port on the battery itself, so we don’t need to mess with adapters at all. In January, DeWalt product manager Sean Fitzgibbons told me the DCB094 could be a bit of a test balloon: “If we get the interest that I expect we’re going to get, I think that would open the door a lot more to potentially adding that directly to batteries down the road.”

I think DeWalt should just do it. A lot of people would buy a USB-C native power tool battery who’d never consider a $100 adapter you’ve gotta take on and off every time.

(5524)
59,99 € 20,99 €
2022 Nuova Tecnologia Bluetooth 5.3: Cuffie bluetooth sono dotate di un chip Bluetooth 5.3, il raggio di trasmissione del Bluetooth può raggiungere i 15 metri di distanza. Il microfono CVC8.0 ad alta definizione incorporato garantisce la qualità dell... read more
(a partire da 06/02/2023 07:58 GMT +01:00 - Altre informazioniProduct prices and availability are accurate as of the date/time indicated and are subject to change. Any price and availability information displayed on [relevant Amazon Site(s), as applicable] at the time of purchase will apply to the purchase of this product.)
Compra
Auto Amazon Links
We use cookies on our website to give you the most relevant experience by remembering your preferences and repeat visits. By clicking “Accept All”, you consent to the use of ALL the cookies. However, you may visit "Cookie Settings" to provide a controlled consent.
Cookie SettingsAccept All
Manage consent